We are all rather proud in Hartlebury of the village's connection with Lieutenant Baxter V.C. The Victoria Cross our country's highest award for bravery was awarded to him for an action on the night of 17th–18th April 1916 near Blairville, France.

Lieutenant Baxter the second son of Mr. Charles. A. Baxter and Mrs. Beatrice. A. Baxter was born at Oldswinford, Stourbridge on the 18th September 1885. He enrolled at Hartlebury Grammar School in May 1894, when his parents came to live at Ivy Crest, Inn Lane. He went on to further his education at Christ's Hospital, Horsham, Sussex. When he left the school on the 31st July 1901, it was suggested on his leaving report that he intended to follow a career in banking, and he did for a time work for the United Counties Bank.

At the time of the outbreak of war he was a schoolmaster at Skerry's College, Liverpool. He was married by this time; his marriage certificate states Edward Felix Baxter (Schoolmaster) married Leonora Mary Cornish (A spinster bom 21st September 1896) at West Derby Registry Office on 24th February 1906. They had one daughter Leonora Frances Baxter bom on the 11th June 1907 at 147 Faulkner Street, Abercromby, Liverpool. He enlisted in Liverpool on 4th September 1914 as No. 32072 ROYAL ENGINEERS. His enlistment papers reveal that he was a tutor, he was 6 foot tall, weight 156 Ibs., complexion sallow, hair and eyes brown, religion C of E. He served as a despatch rider attached to HQ Staff in Rodney Street, Liverpool under Brigadier Edwards and Colonel Von Stomm. He was promoted to Sergeant, then he transferred and was commissioned a year later into the 1/8th (Irish) Battalion, The King's (Liverpool Regiment).

An extract from the London Gazette, dated 26th September 1916, records the following: 'For the most conspicuous bravery. Prior to a raid on the hostile line he was engaged during two nights in cutting wire close to the enemy's trenches. The enemy could be heard on the other side of the parapet. Second Lieutenant Baxter, while assisting in the wire cutting, held a bomb in his hand with the pin withdrawn ready to throw. On one occasion the bomb slipped and fell to the ground, but he instantly picked it up, unscrewed the base plug, and took out the detonator, which he smothered in the ground, thereby preventing the alarm being given, and undoubtedly saving many casualties. Later, he led the left storming party with the greatest gallantry, and was the first man into the trench shooting the sentry with his revolver. He then assisted to bomb dug-outs, and finally climbed out of the trench and assisted the last man over the parapet. After this he was not seen again, though search parties went out at once to look for him. There seems no doubt that he lost his life in his great devotion to duty.'

He died on Tuesday, 18th April 1916. Aged 30, and is buried in Fillievres British Cemetery, Pas de Calais, France. His will stated that his address was 5 Blantyre Road, Liverpool and that he left £212.8s.5d. Property returned to his widow included a cigarette case, a silver matchbox, and two knives. In May 1916 his wife was living at 3 Roden Avenue, Kidderminster.

No greater testimony to the valour of Lieutenant Baxter is required than that paid by Colonel Fagan, who, in a letter to Mrs. Baxter explaining the circumstances of his death, added, "The raid was successful, due to a great extent to the gallantry and resource of your husband. The men say his gallantry and coolness were marvellous. He had not been with the battalion very long, but we had realised what a splendid fellow he was. I have lost one of my best officers."
Similarly his fellow officers speak in the highest terms of him, and one of his men, wounded in the same raid, described him as the most popular officer in the regiment and an officer and a gentleman.

Of such a man it can truly be said that he bought honour both to his regiment and to the city whose name it bore. Heroism is not an uncommon feature of the operations of the British Army, but even in heroism there are degrees, and it required conduct of outstanding merit before the award of the Victoria Cross - the highest recognition of all - was made. That Lieutenant Baxter fully deserved the honour conferred upon him posthumously is fully testified to by those who had the advantage of knowing him under actual battle conditions. 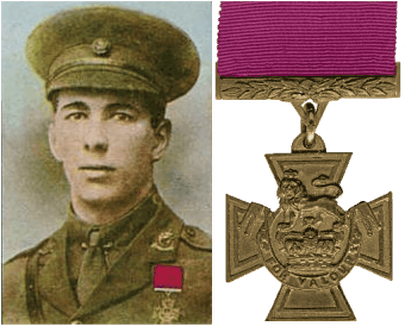