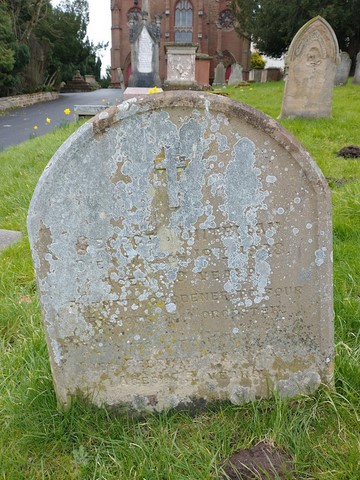 Badly weathered, and therefore difficult to read, the headstone of
George Whiteman stands near to the War Memorial towards the
front of St. James' churchyard.

Closer inspection reveals that George was "faithful gardener to four Bishops of Worcester", perhaps explaining the prominent position for his headstone. He must have been a well known figure in the village. The bishops he served were John Perowne (1891–1902), Charles Gore (1902–1905), Huyshe Yeatman-Biggs (1905–1918), and finally Ernest Pearce (1919–1931).

George did not originate from Hartlebury, or even from Worcestershire. He was born at the beginning of 1849 in Mansfield, Nottinghamshire, to parents, Jonathan and Mary. He had 5 siblings—2 older sisters, 2 younger sisters and a brother.

The Census for 1851 reveals that the family lived in Market Place, Mansfield, and his father was a hairdresser. Jonathan is listed in the 1844 edition of the Mansfield Trade List. The family were still at the same address in 1861, but Jonathan is now recorded as a Barber (an interesting distinction from "hairdresser"), and one of George's sisters was a cotton factory hand.

At the age of 23, when the 1871 Census was undertaken, George was living in the village of Langar (between Nottingham and Grantham), at The Rectory. The property was in the Diocese of Lincoln, and the head of the household was Rector Thomas Batter. His wife & daughter lived with him, together with a number of servants including George already recorded as a gardener.

The records show that on 29 Nov 1874 George married Hannah in Morpeth, Northumberland. Hannah had been born in Westmorland, which might explain why they were married “up North”. They had 3 children—Mary born in 1875, Minnie in 1878 & George in 1881. All 3 children are recorded as being born in Chester le Street, where the family were at the time of the 1881 Census. George is working as a gardener. Sadly their son George died just one year later in 1882.

A journey from Northumberland to Hartlebury would have been quite an expedition in the late 1800’s, but the family appear to have made the journey. In 1891 they are recorded as living at The Lodge, Stourport Road, Hartlebury. George is working as a gardener and domestic servant. Records do not explain how he came by the job, or when he began working at Hartlebury Castle. Perhaps there was influence resulting from his connections with the Rector at Langar.

In 1901 their address is recorded as Hartlebury Park. George and Hannah are listed together with their daughter Minnie. By this time Mary is no longer living with the family. George is working as a gardener and Minnie is noted as a dressmaker, working from home on her own account. There are a number of other servants including an under-gardener suggesting that George had a more senior role. The Bishop is John Perowne.

In 1911 the address appears as The Castle Lodge, Hartlebury with George still working as the gardener. A separate Census reveals that his daughter Mary is working as a servant in the village of Tickhill near Rotherham.

There is evidence that Minnie married John Bray in 1912 in Droitwich, and gave birth to a son (also called John in 1915). Sadly Minnie died that year.

The most recently published 1921 Census shows that George and Hannah were still at The Lodge, with George still working as a gardener.

George seems to have worked as a gardener all his life, and was gardener to the Bishops of Worcester for at least 30 years. His headstone deserves to be in a prominent location on the churchyard and is in fact next to that of Bishop Perowne.