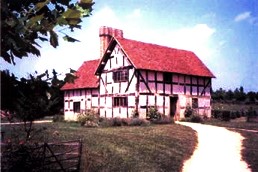 Norchard Cottage, originally located in the Parish of Hartlebury, Worcestershire, was a typical timber framed farmhouse of the 17th century, with an L-shaped plan and a central sandstone stack of diamond form.

The oldest portion of the house, consisting of the kitchen and kitchen chamber, was constructed in the 1630's. In more recent years a coin dated 1630 was found in the wall timbers in the back bay of the house, which had a loft above.

The first recorded owner was John Smith. When he died in 1671, he left the house to his son-in-law Edward Woodhouse.

It is believed that by the 1670's John Smith's family had added a four-room front part to the house.

In 1692, after the repeal of the hated "hearth tax", the then owner, Edward Woodhouse, had the principal fireplaces re-worked or added and elaborate Jacobean chimneys were built. The date stone in the chimney bore his initials, F.W., and the date, 1692.

Edward Woodhouse was a farmer of some standing and a Governor of the Queen Elizabeth Grammar School in Hartlebury (now the Cambrian School). When he died the house was passed to his son, also named Edward.

Edward Woodhouse jnr, later left Norchard Cottage to Robert Fidkin his brother-in-law who held it till he died in 1724. From this period on certain changes occurred. A fine new house of classical sandstone was built opposite for the farmer. (This is now known as Yew Tree Cottage).

Norchard Cottage was then divided up and became accommodation for farm workers.

It continued to be used for that purpose until the 20th century when the Cottage unfortunately became derelict, such that in 1960 Droitwich Rural Council ordered its removal because of the building of new houses around it.

A lecturer from Stourbridge College of Art, named George Elliott, bought the cottage for £250 in 1973 when he heard that the Council were planning to demolish it. His purchase was conditional on him moving it from the site as soon as possible. A survey established that the general condition of the house was good. Some roof timbers had been replaced, most of the wattle and daub infill had gone having been replaced by bricks and the roof was clad all over in large hand made tiles.

Mr Elliott dismantled the house stone by stone, beam by beam, preserving and labelling each piece and storing the beams in a nearby barn. During the dismantling of Norchard Cottage in 1974, a "hand of playing cards" and a gold coin of Charles I were found in the fireplace. In addition many Georgian coins and lead token money were found under the floor, and a copper coin of 1692 was located at the entrance to the new cross-wing.

Most of the tiles, the sandstone and bricks were stored at the Avoncroft Museum of Buildings.

The house arrived at the Frontier Culture Museum in 1992, and was reconstructed as the Museum's 1600's English Farm. A dedication ceremony took place in May 1993.

Here is a web link to the Museum

The individual pieces of the house that include posts, beams, studs, rails, plates and rafters, were jointed to each other with mortise and tenons, creating an interlocking frame of oak. Some timbers were very long whilst others were quite short and even slightly curved that would suggest that they came from small, irregular trees or from the branches of larger trees. They would have been cut by a saw or with an axe and adze. The individual timbers for this house would have been measured, cut, joined and assembled on the ground into a wooden frame. These completed frames were then erected and joined together. The basic timber structure has a front and a back wall frame and two cross frames to form the end walls. Each room in the structure is a bay formed by a cross frame and in this house the bays are about 15 feet. Norchard Cottage was made of simple square pattern framing that is typical of most English houses.

After all the frames were in place the builders would have filled the spaces between the framing elements with wattle and daub to form complete walls on the exterior and interior. Vertical oak staves were inserted in the frame, and wattles made of hazel or split-oak were woven round them to create a basket like appearance. The workers then spread daub on both sides of the wattles. This was a mixture of clay with some straw, animal hair, lime, sand and dung. A smooth topcoat was then applied inside and outside. Finally, a lime-wash finish was spread on each exterior panel, but not on the timbers. On the interior, lime-wash was spread on both the timbers and the daub panels. The lime-wash was an important protective coating that prevented deterioration of the panels.

The roof frame was a type called post and truss, the most common form in England at the time. Large principal rafters and small common rafters rested on a horizontal wall plate that formed the top of the walls of the house. Trenched purlins were the horizontal members that joined the rafters. Finally the house was covered with red clay tiles.

Based on the size of the house, and wills and inventories of the owners of similar structures of this period, it is reasonable to conjecture that the Woodhouse family were independent farmers. They would have produced food not only for their own household that would have included their families and their servants and/or farm labourers, but also grains, wool and cheese for market.

Similarly we can only make a reasoned guess as to the furnishings of the house in those days.

In the 17th century oak was the favoured wood for furniture. The furniture was usually made by local, highly skilled craftsmen who were capable of making fairly complicated pieces that included mortise and tenon joints, elaborate turning of legs and carving on headboards and beds, the backs of great chairs and the aprons of tables.

The hall was the main room for the family's life then. Previously during the preceding centuries the hall, in such houses, would have served as an area for both cooking and living but by the mid-17th Century, the kitchen was developing as a separate room for cooking.

The hall now, with its fireplace, had become the eating and living space. Here the family would have set up its largest table with seats at the table being in the form of backstools (chairs) with board seats and backs, later upholstered with fabric or leather, and forms (benches) or joined stools.

Most family members and servants would have eaten their meals on wooden trenchers, whilst tin-glazed pottery dishes and pewter plates and bowls would have been used as serving dishes. Finally rush lights and/or candles mounted in brass or pewter candlesticks may well have provided lighting.

By the late 17th Century, a new style of furniture was beginning to appear in the homes of the more prosperous farmers. Walnut was now the preferred new wood, and new forms included settees, drop-leaf tables and gate-leg tables were the fashion.

The parlour was developing in Worcestershire as a special room for entertaining and conversation and this often contained some of the finest furniture in the house, such as elaborately carved chairs with high backs and arms.

Upstairs were the bedrooms and storage rooms. Parents might have a bedchamber of their own, but children and servants were accustomed to sharing rooms with several other people.

The parents at Norchard Farm Cottage might well have had a "tester" bed. This was a four-poster bed, board and frame of oak with a carved skirt and a frame on top from which hung a heavy set of curtains to keep out the drafts and provide privacy. Another type of bed from the period was a "half-headed bed". This resembles a modern double bed with an elaborate carved headboard.

Children slept on "truckle" or "trundle" beds, while servants often slept on a pallet of thin straw on the floor.

Bedchambers in this period often included chests, used for storage for clothing and bed linens. Elm, Oak and Pine were the traditional woods for these chests and the residents of this house may well have had elaborate, carved or brightly painted chests. Smaller carved boxes provided storage for important documents such as deeds and leases, or for a large family Bible that might contain details of the family history.