Wilden and the Baldwins 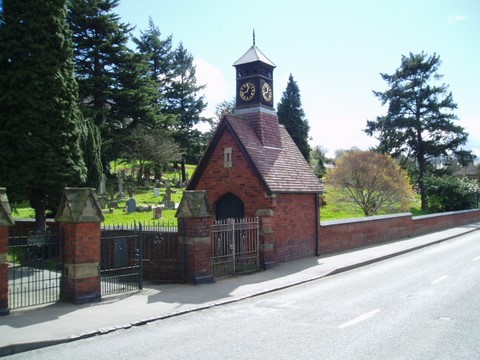 Wilden lies about two miles west of Hartlebury and has been in existence since at least 1182, when it was known as Wineladune, or Winelduna, meaning Winela’s hill. The hamlet, as it was then, was part of the parish of Hartlebury until 1904 when it was decided that it should be a separate entity, the new parish being formed from parts of Lower Mitton (now Stourport), Hartlebury and Kidderminster.

There have been various spellings of the name including, in 1299, Wivelden–which still exists as a street name in the village today. By 1480 it was known as Wildon, a version of which was still being used as recently as 1855. In the Domesday Book Wilden was recorded as the Mill at Mitton or Mettune, meaning King’s Land.

Before Wilden had its own burial ground, the dead of the hamlet were taken for burial to Hartlebury, hence the names of Bigbury Lane and Littlebury Lane, which is just now a trackway, the former being used for adult coffins and the latter for the children. Wilden has always been very different from Hartlebury as it was a centre of industry from very early times. There was a forge at Wilden from at least the middle of the 17th century, which was built by the Wilmot family of Hartlebury and which, by 1679, was owned by Philip Foley. It later became ‘Mr Farmer’s Wire Works’ and then ‘The Wilden Iron and Tinplate Company’ run by Lewty’s. The next owners of the forge, in 1840, were the Baldwin family, who were already substantial industrialists in the surrounding area.

To understand the Wilden story it is necessary to know a little about the Baldwin family. They had come from Shropshire, having been undistinguished landowners in Corvedale for five or six hundred years. They had begun producing coal and iron during the eighteenth century at Broseley, initially, going at the turn of the nineteenth century south into Worcestershire. It would appear that Thomas Baldwin established an iron foundry in Stourport in 1770. His eldest son George, was the grandfather of Stanley Baldwin, later famous as Prime Minister of Great Britain. George Baldwin had twelve children, the youngest of whom was Alfred, Stanley’s father.

Without Alfred, Wilden would have been a very different, indeed much poorer, place. He was, undoubtedly the ‘father’ of modern Wilden. He was born in 1841, a few months before his father died of scarlet fever. By the time of his birth none of the Baldwins were wealthy, some were rough and sensual, most worked in the iron works and all were staunch Methodists. Alfred did well at school but lack of family finances meant that was unable to have a higher education so he began work in the family firms of E, P. and W. Baldwin (his brothers) of Wilden, and Baldwin Sons and Co. of Stourport ( his uncle and cousins). At this time, the family had a variety of business interests including a worsted spinning mill at Stourport, a carpet manufactory at Bridgnorth and a tin plate works at Wolverhampton. The Baldwin men were no strangers to the good things in life, and although Alfred saw no harm in having money and power, his maxim throughout his life was to embrace the good things and use them to do God’s service. This he continued to the great benefit of the people of Wilden especially, and he was always interested and involved in public affairs.

From an early age Alfred felt unable to embrace the staunch Methodism of his family and, after toying with the idea of Roman Catholicism, he found that the Church of England suited him, describing himself as ‘an extreme high churchman’. He was a studious, literary man, useless in practical matters but an extremely good judge of character with an aptitude for administration. In 1866, at the age of 25, he married Louisa, the 21 year old daughter of a Methodist minister, and one of the five famous Macdonald sisters. These five sisters mostly married well known, influential men–Edward Byrne Jones, artist, John Kipling, father of Rudyard the poet and Edward Poynter, artist.

Another sister, Edith, never married and lived at Wilden House with her widowed sister, Louisa after Alfred died until her own death in 1937.

Alfred and Louisa lived when first married in High Street in Bewdley and it was there that Stanley, their only child, was born. The story is told that when he was born the family cook took him up three flights of stairs to the top of the house and held him aloft to ensure that he would rise high in the world—history does not tell us whether the poor woman lived long enough to see just how high that was to be!

Alfred was in business still with two of his brothers but by 1870 the business at Wilden was not prospering and the partnership was dissolved, Alfred buying them out, settling their debts and then continuing as sole proprietor. Alfred and his family moved to Wilden House (demolished after Edith died) which had long been occupied by the proprietor of the ironworks. The village at this time was populated mainly by families who were employed at the forge and Alfred and Louisa did all in their power to improve the life of the villagers. Alfred was a very popular employer and landlord. By 1891 he was fifty years old and wealthy and he was adopted as parliamentary candidate for the conservatives in Bewdley. He was elected to parliament in 1892, continuing to sit until his death, when Stanley inherited his father’s seat. Alfred was elected to the Board of the Great Western Railway in 1901, becoming chairman in 1905. In 1908, after attending a meeting of that board he became acutely ill and died very rapidly from a heart attack. He was buried at Wilden, of course, in the graveyard of the church which he had built for the village, which he regarded as his ‘mini cathedral’.

There are many reminders of Alfred in Wilden, not least, of course, the church of All Saints which was built from 1878 until 1880 and which was entirely paid for by Alfred at a cost of £3,000. This was followed two years later by a school and then a parsonage, all funded and endowed again by Alfred.

All Saints Church, Wilden remains one of the best examples of Morris and Co’s church work. All the windows were designed by Sir Edward Byrne Jones, the Pre Raphaelite artist, and the gold altar frontal was designed by William Morris himself, to be embroidered by Louisa and her sisters Edith and Georgiana. The clock tower, erected in memory of Alfred, was designed by Ambrose Poynter, artist and son of a famous artist Edward Poynter, with carvings by John Kipling, father of Rudyard Kipling. Another interesting feature is the WW1 Memorial Tablet, which was made by the Bromsgrove Guild 1920–21.

Stanley Baldwin, though not living at Wilden since he was a young man, continued to be involved in the ironworks, by then just known as ‘Baldwin’s’ and maintained a benevolent interest in the village. Again, there are many stories attached to that generation of the family, who continued their philanthropic deeds, with the most well known association locally being that of a gift of a maternity hospital to the people of Stourport and named for Stanley’s wife, Lucy. Sadly, through the machinations of the NHS the Lucy Baldwin Maternity Hospital no longer exists, the site of which is now a residential development.

Most of the inhabitants of Wilden were, in the early days, associated with the ironworks and many of them came to the village from areas where ironworking was taking place–Shropshire, the Black Country, Glamorgan and Monmouthshire amongst them. The occupation of these people was mainly associated with the trade–forge labourers, engineers, puddlers, rollers, tin porters and so on. There were also many other businesses in the heyday of the iron works which supported the thriving community–haberdashers, milliners, dressmakers, farm workers, gardeners, victuallers, school mistresses and more. There were shops and public houses and even at one time, a Co-operative Society which was established for the benefit of the local workmen and this movement was not confined to the people of the village–many trudged across the fields from Stourport to share in the benefits.

Now, apart from a small trading estate which is situated on the site of the old Baldwin’s Ironworks, Wilden is largely a residential village–still with its excellent primary school, village hall and All Saints Church so kindly provided by Alfred Baldwin.

The History of Wilden Industrial Estate