The Woodhouse Family of Norchard 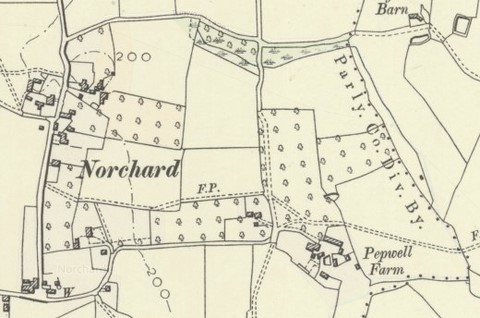 Woodhouse was not an unusual name in Worcestershire in the 17th century, but it was not as common as the names of families associated with them in Norchard, namely Best, Fidkin and Smythe (Smith).

The name of Woodhouse is also found in the 17th century in Salwarpe, a few miles south east of Hartlebury adjacent to Ombersley parish.

His daughter, Cicily, married Edward Woodhouse in about 1646. She may have been the Cicely Smith, daughter of John Smith who was christened in January 1621 in the parish of Doverdale (Dodderhill?). If so, she would have been twenty-five in 1646, and that was in the typical age range for marriage among daughters of yeoman.

Edward and Cicily (Or Cicely) Smith Woodhouse had at least six children who survived. A daughter, Elizabeth Woodhouse, was christened in Hartlebury Parish Church on 11 March 1648. On January 18, 1651. a second daughter, Marie or Mary was christened and three years later, on April 29, 1654 the birth of Anne Woodhouse to Edward and Cicelie was recorded in the Hartlebury Parish Register.

The birth of a son, Edward, occurred on 2 February 1656, and another, Joseph, on August 9, 1659. There was another son, John, who may have been the eldest of the six children, born perhaps in 1646. He was named in the Will of his grandfather John Smith in 1671. If Edward was the son of John of Salwarpe Parish, then it would have been a typical pattern to name his eldest son after his father.

We do not know where Edward and Cicily Woodhouse set up home, but they must have had a house of their own, for, according to Laslett (? Peter Laslett, an English historian), couples simply did not marry until they could set up housekeeping independently. Cicily Smyth Woodhouse may have been an only child. When John Smith of Norchard, died in 1671 he left, 'to my son in law Edward Woodhouse and Cicilia, his wife, All my lands in Norchard together with the Lands I lately purchased off one John Best … within the parish of Hartlebury, and also my Lands in Tugwood … within the parish of Elmley Lovett.'

Edward and Cicily probably took over the main house at Norchard in 1671 with their family who ranged in age from twenty-three to twelve. In fact. if John Smyth was a widower with only one daughter, Cicely and Edward Woodhouse may have already lived in the house. It was an ideal time to gain control of a substantial farm such as Norchard. The children were in a position to provide good labour in the family venture.

The girls could assist their mother in the making of butter and cheese, a common occupation for daughters whilst they remained in their parent's house. Yeomen's daughters were not customarily put out to service or apprenticed, so they worked alongside their mothers until time for their own marriage. These dairying activities were important in the Woodhouse household. It is known from the inventory of Edward Woodhouse that they had a day house or dairy room and that they had a churn and cheese press.

The milk production of six cows owned by Edward Woodhouse in 1682 was greater than his family could consume. So the butter and cheese production was not only for family consumption, but also for the local market. It was by such supplemental economic activities that the thrifty yeomen of England gradually built up their wealth.

The 1705 inventory of Edward Woodhouse, the younger, gives additional information about these dairying activities of the family. At the time the inventory was taken, the family stored in the house thirty pounds of butter, five old cheeses and fifty new cheeses.

Brewing was another activity that took place in the Woodhouse household, as evidenced by the presence of hops and of a malt mill. Malt is barley that has been prepared for the purpose of brewing. Like the dairy operation, this was part of the work of the women of the household.

Worcestershire and nearby Staffordshire were among the areas in England in which flax was grown. Edward Woodhouse Jnr's inventory indicates that his household was much involved in the production of this market crop, for he had 59 pounds of flax on hand. There is not, however, any indication that the household was involved in the linen industry. Neither Woodhouse inventory included a loom, or even a spinning wheel, although there were large amounts of linen of all sorts. The 1705 inventory had 21 ells (an old unit of measure for cloth measuring 45 inches or a yard and a quarter) of flax on hand. Possibly a local weaver turned the Woodhouse flax into linen.

The Midlands were considered England's chief granary, according to Campbell, and the Woodhouse inventories indicate that this family contributed their share to that reputation. When Edward Woodhouse the elder died in May 1682, he had in the ground nineteen acres of "Lent Graine" or spring planted grains valued at £11. In addition there was threshed and stored grain on hand to a value of £25. Helping their father with the farming of these acres was an important task for the Woodhouse sons, John, Edward and Joseph. The Woodhouses probably used some male servants as farm labourers.

It has not been possible to estimate the number of acres that the Woodhouse family was farming beyond 36 acres specifically mentioned planted in grain. When John Smith of Norchard made his Will in September 1671, he left

Smyths had lived at Toogood or Tugwood since the mid-sixteenth century. This Tugwood land was held on lease from Sir Thomas Thornburgh, Knight, and his wife, Dame Helen granted on April 14. 1639 to John Smyth the elder, his son John Smyth the younger and Cicely Smyth and their heirs forever. Cicely's brother John died in her lifetime, so she fell heir to all these Tugwood lands.

Mildred Campbell stresses the importance of land acquisition to 17th century yeomen. They purchased land wherever they could, not only from gentry, but also from their poorer neighbours, copyholders, and tenants who were sometimes caught in an economic crisis. Both Edward Woodhouse and his father-in-law John Smyth exhibited this typical yeoman behaviour. John Smyth purchased land from his neighbour John Best. Edward Woodhouse, concerned to be able to set each son up with a farm, purchased at least two that we know of.

In the twenty-sixth year of King Charles II's reign (1675, counting not from the Restoration but from Charles I's death) he leased land from Thomas Foley Esquire and Thomas Foley, his son. The terms of this indenture are not known, whether it was a lease for lives or for a specific term such as twenty-one years. Some years later, he bought a tract at nearby Crossway Green from Edward Harper, another prominent Hartlebury yeoman.

Several important events occurred in the Smyth-Woodhouse family in the eleven year span from 1671 to 1682.

The first was the death of grandfather, John Smyth, a widower. While his passing may have been regretted and mourned, it also left his daughter and son-in-law in a sound financial position.

A year after that, the oldest of the granddaughters, Edward and Cicilia Woodhouse's daughter, Elizabeth, was married at the age of twenty-four to John Havord. The wedding occurred on November 2, 1672, not at the Hartlebury Parish Church, but at All Saint's Church in Worcester. Perhaps Harvord was from there. It was customary among yeoman (farmer) families for the parents of the bride to entertain at a dinner at their home following the wedding. The newly weds generally resided a month with the bride's family before setting up housekeeping in their own place. The young Harvord couple presented her parents with three grandchildren between 1673 and 1682.

Another event, but a less happy occasion, may have been the death of John Woodhouse, possibly the oldest of John Smyth's grandchildren, and his namesake.

Edward Woodhouse, the elder, occupied a position of respect and status in the Hartlebury community. One sign of this is that he was elected to the Board of Governors of the local school, the Free Grammar School of Queen Elizabeth at Hartlebury. He was serving in that position as early as 1672, and continued through the decade. In 1680, he was named the Collector of Accompts for the school.

When Edward Woodhouse made his Will in 1682, he left the Norchard lands to his wife Cicilia for her lifetime, and then to go to his son Edward. In addition Edward was to receive Tugwood (Tuggood) farm which had come from John Smyth, on condition that he pay his sisters Mary and Ann the sum of £144, within two years of their father's death. If he failed to make that payment in time, then the farm was to belong to his two sisters. He provided for his younger son, Joseph, by leaving him his land at Crossway Green that he had recently purchased from Edward Harper. He also left Joseph £40.

Edward Harper, a long time family friend, was the son of Edward and Frances Harper, and was born at Norchard in 1654. He had married Elizabeth Harward of a large Hartlebury family, one of whom ran the local inn. The Harpers had five children between 1678 and 1690. Edward Harper, like his neighbours, the Woodhouses, served on the school board and was one of the witnesses to the Will of Edward Woodhouse, junior. Why he was willing to part with Crossway Green can only be guessed.

Edward Woodhouse's estate was appraised at £222.18s. He must have had other assets from which his executors, his wife and son Edward, were to pay £288 in bequests to the daughters Mary and Ann, and the £40 to his son Joseph. It is not possible to know the extent and value of the landholdings, but he was clearly a person of means in the community. When the size of his personal estate is compared with some thirty other inventories in the 1600-1700 period, only a few persons in Hartlebury had larger personal estates.

Sometime after her father's death, Ann Woodhouse married a local man, Robert Fidkin, of a very large local family. The birth dates of two of the children of Ann and Robert Fidkin are known - Elizabeth in 1693 and Humphrey in 1698.

Cicily Smyth Woodhouse must have died sometime in the late 1680's, or even in 1690's, but record of her burial has not been located.

All these people are likely to be buried in Hartlebury Churchyard.

The two surviving Woodhouse brothers, Edward and Joseph, may have remained bachelors. At his mother, Cicely's, death Edward came into the full ownership of the Norchard farm and its house, as well as of the Toogood lands. Edward Woodhouse, the younger, followed in his father's footsteps as a governor of the local grammar school, being elected in 1686. He was still serving in that capacity in 1698. In that year the governors paid "Joseph and Bird" ten shillings for a table. That could indicate that the younger Woodhouse was working as a carpenter or joiner.

When Edward Woodhouse died in 1705 at the age of forty-nine, he made his brother-in-law, Robert Fidkin, this principal heir. His personal estate, when appraised in 1706 by four of his neighbours - Thomas Lowbridge, Henry Whitaker, Robert Ballard and Edward Harper, all of whom served with him as Governors of Hartlebury Grammar School, was valued at £297.

His Will mentions his Norchard house and land he left to Fidkin, some additional parcels, a meadow called Pool in Waresley; also Walsey and Pepwall in Hartlebury, and Tugwood lands which had come to him through his mother and her father, John Smyth.